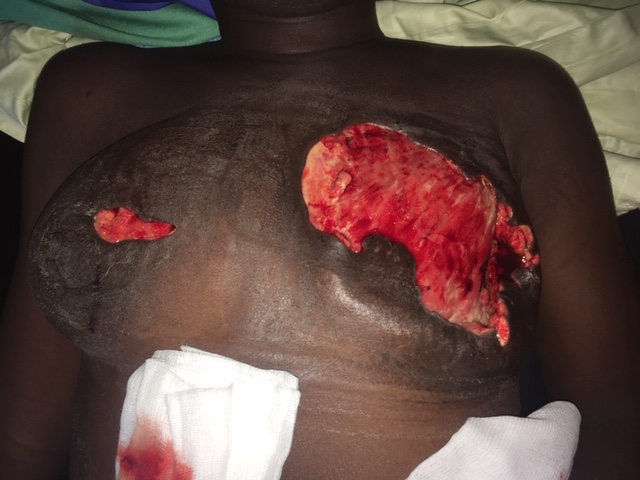 One of the traditional ways of treating illness in Sierra Leone is by “hot fermentation”: applying boiling hot herbs/leaves on the affected body part.
Unfortunately this often does not heal the illness, but causes additional burn wounds to the affected body part These burn wound with their infection can cause severe damage to the human body.

That is what happened when the 25-year-old Kadiatu had mastitis (infection of her breast). She comes from a remote village north of Makeni.
Traditional medicine was applied to her breast, but this made things only worse. When she arrived at City Garden Clinic her whole left breast was completely infected and necrotic, even a part of her other breast.

Even though she had no money, dr AND decided to admit her and to help her. Her left breast was no longer viable and she had to loose that breast. Several times she had to go to the operation theatre to get the wound clean and later to assist the wound to close. She has been in the hospital for about 6 weeks, when her breast wound almost closed. But still payment of the hospital bill was not possible.

We decided she is an exception, and a successful exception, we treat despite the lack of money.

Kadiatu be a spokes woman against “hot fermentation”!